In Okinawa, a miraculous and mysterious martial art has come down to us from the past. It is said that one who masters its techniques can defend himself readily without resort to weapons and can perform remarkable feats: the breaking of several thick boards with his fist or ceiling panels of a room with a kick. With his shuto ("sword hand") he can kill a bull with a single stroke; he can pierce the flank of a horse with his open hand; he can cross a room grasping the beams of the ceiling with his fingers, crush a green bamboo stalk with his bare hand, shear a hemp rope with a twist, or gouge soft rock with his hands.

Some consider these aspects of this miraculous and mysterious martial art to be the essence of Karate-do. But such feats are a small part of karate, playing a role analogous to the straw-cutting test of kendo [Japanese fencing], and it is erroneous to think that there is no more to Karate-do than this. In fact, true Karate-do places weight upon spiritual rather than physical matters, as we shall discuss. True Karate-do is this: that in daily life, one's mind and body be trained and developed in a spirit of humility; and that in critical times, one be devoted utterly to the cause of justice.

Karate-do is a martial art peculiar to Okinawa in its origins. Although it has in the past tended to be confused with Chinese boxing because of the use of the chinese "kara" character in its earlier name, in fact for the past thousand years, the study and practice of masters and experts, through which it was nurtured and perfected and formed into the unified martial art that it is today, took place in Okinawa. It is, therefore, not a distortion to represent it as an Okinawan martial art. 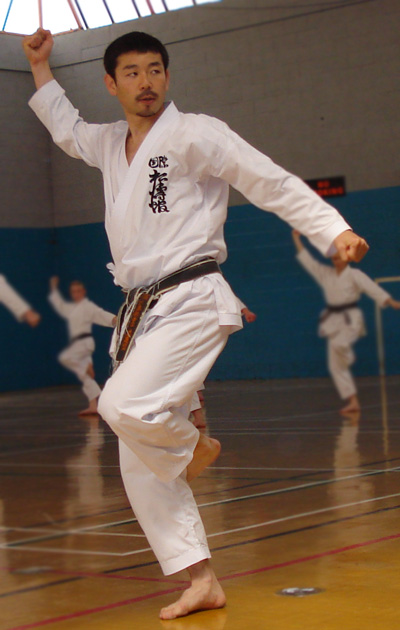 One may ask why the chinese "kara" character has been retained for so long. As I discuss in the section "The Development of Karate-do," I believe that at the time the influence of Chinese culture was at its peak in Japan, many experts in the martial arts traveled to China to practice Chinese boxing. With their new knowledge, they altered the existing martial art, called Okinawa-te, weeding out its bad points and adding good points to it, thus working it into an elegant art. It may be speculated that they considered "kara" (with the chinese character) an appropriate new name. Since, even in contemporary Japan, there are many people who are impressed by anything that is foreign, it is not difficult to imagine the high regard for anything Chinese that prevailed during that period in Okinawa. Even at the time of the present writer's youth, lack of a full set of Chinese furniture and furnishings in one's home was a serious impediment to the social influence of any leading family. With this background, the reason for the choice of the chinese "kara" character, meaning "Chinese," as a simple case of exoticism is apparent.

Following tradition, the writer has in the past continued to use the chinese character. However, because of the frequent confusion with Chinese boxing, and the fact that the Okinawan martial art may now be considered a Japanese martial art, it is inappropriate, and in a sense degrading, to continue use of the old "kara" in the name. For this reason, in spite of many protests, we have abandoned the use of it to replace it with the new character KARA.

What is the meaning of Kara

The first connotation of kara indicates that karate is a technique that permits one to defend himself with his bare hands and fists without weapons.

Second, just as it is the clear mirror that reflects without distortion, or the quiet valley that echoes a sound, so must one who would study Karate-do purge himself of selfish and evil thoughts, for only with a clear mind and conscience can he understand that which he receives. This is another meaning of the element kara in Karate-do.

Next, he who would study Karate-do must always strive to be inwardly humble and outwardly gentle. However, once he has decided to stand up for the cause of justice, then he must have the courage expressed in the saying, "Even if it must be ten million foes, I go!" Thus, he is like the green bamboo stalk: hollow (kara) inside, straight, and with knots, that is, unselfish, gentle, and moderate. This meaning is also contained in the element kara of Karate-do.

Finally, in a fundamental way, the form of the universe is emptiness (kara), and, thus, emptiness is form itself. There are many kinds of martial arts, judo, kendo, sojitsu ("spear techniques"), bojitsu ("stick techniques"), and others, but at a fundamental level all these arts rest on the same basis as Karate-do. It is no exaggeration to say that the original sense of Karate-do is at one with the basis of all martial arts. Form is emptiness, emptiness is form itself. The kara of Karate-do has this meaning.